A couple of weeks ago, I came across this post for a Paleo version of oatmeal by Kelly Bejelly on her blog, A Girl Worth Saving.

Normally, the words Paleo and Oatmeal would not go together – oats are a grain, and are not Paleo in the slightest.

But this recipe uses seeds in place of the oats and that is what makes it Paleo.

My girls all used to LOVE oatmeal back before we became Paleo, and they have been begging me to make them some, so I decided to give this recipe a try.

I did change it up slightly – I added some nuts for a starter (1 cup of walnuts) and I increased the amount of sunflower seeds to 1 cup, and I didn’t measure out the 1/2 lb of pitted dates because my kitchen scales had died (dropped on the tile floor in the kitchen one time too many!), so I eyeballed that.  I also added 1/2 cup of flax seeds as well, simply because I had them out on the kitchen counter at the time when I was making this.

Other than that, it was essentially the same.

The nuts and seeds in this recipe make it an AIP stage 2 reintroduction.  When reintroducing foods on the AIP, I recommend this guide.

This is what the finished product looked like prior to cooking: 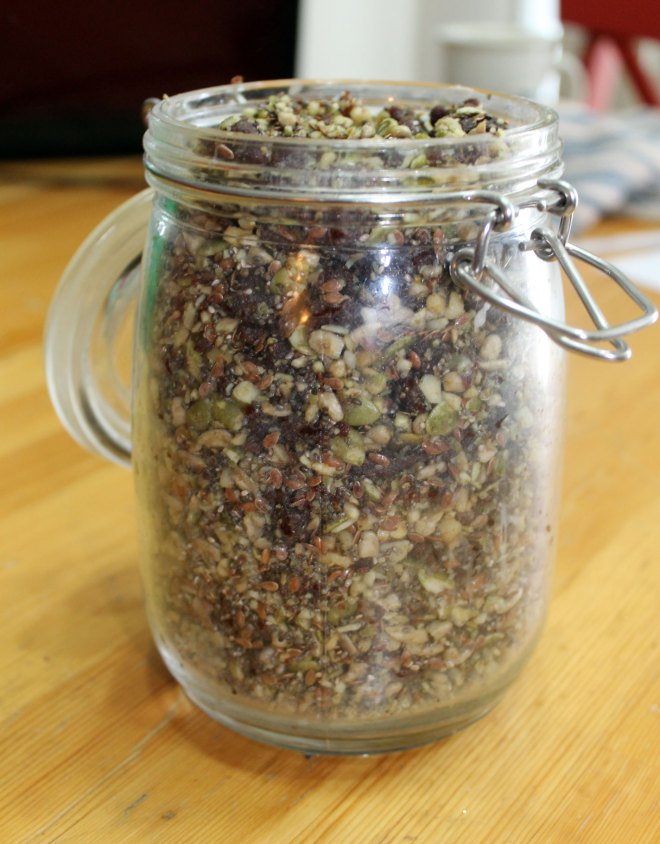 As you can see, it is a fairly coarse mixture:

Hubby said it looked like something you would feed to a farm animal and that he would need the molars of a cow to eat it!

Once it was cooked with coconut milk, it tasted creamy and delicious, and the nuts and seeds softened beautifully.

To use, you add 1/4-1/2 cup of the mixture per person to a pan along with 1/2-3/4 cup of coconut or almond milk (or cows milk if you eat dairy – but that will make it primal) per person.  Bring to a boil and simmer for 10 minutes until thickened.